Witch-hunts have become epidemic throughout Africa. Although witch-hunts have historically been viewed as gender specific, with a large percentage of victims still identified as elderly and solitary women, recent reports show that victims of witch-hunts include both women and men of all ages. [0]

Published media reports highlight tragic human rights abuses arising as a result of witchcraft accusations. The true extent of witch-hunts in Africa (and elsewhere in the world) however has yet to be determined. Many incidences of witch-hunts go unreported and very few governments actually keep detailed statistics of such incidents..

Witch-hunts are increasing in occurrence and brutality !

Witch-hunts are largely perpetrated by individuals and groups who believe that misfortune is enabled through the agency of ‘a witch’, and such accusations are most often motivated through localized forms of religious extremism by practitioners of traditional African religions who believe that witchcraft is always the cause of misfortune, traditional healers (including diviners, herbalists, ‘witch-doctors’) who use various forms of divination to point out suspected witches, and charismatic revivalist Christian religious leaders (pastors and prophets) who use their prejudicial notions of witchcraft as a manifest form of satanic evil to encourage their followers to find (accuse) and convert suspected witches.

The victims do not identify themselves as Witches !

The words ‘witch’ and ‘witchcraft’ are used predominantly as an accusation throughout Africa, either to describe a number of clearly defined traditional religious practices that do not self-define as witchcraft, as well as a number of variable urban legends perpetuated by religious leaders and traditional healers to identify women, children and men who are not actual Witches.

Belief is NOT evidence ! Accusation is NOT proof !

In rare instances where alleged confessions of being a witch or practicing witchcraft are made by the accused, reported testimony is either irrational or coerced through torture or threat.

The ‘witchcraft’ most often referred to through accusation, allegation and harmful superstition, exists only in the minds of those who believe that witchcraft is the embodiment of evil and that witches are responsible for misfortune, disease, accident, natural disaster and death.

Victims have the right to be presumed innocent !

The ’30 days of advocacy against witch-hunts’ campaign was launched in March 2008 by SAPRA, under the banner of ‘Touchstone Advocacy’, in response to ongoing accusations of witchcraft and brutal witch-hunts in South Africa and elsewhere on the African continent.

Since 2008 the South African Pagan Rights Alliance has repeatedly appealed to all Commissions for Human Rights internationally to encourage all governments to:

a. halt the persecution of suspected or accused witches,

b. uphold and strengthen a culture of human rights for all equally,

c. respond appropriately and humanely to incidences of accusations of witchcraft,

d. make the eradication of violence against suspected witches an international priority,

e. train local police to manage witchcraft accusations and violent witch-hunts in a way that affirms the dignity and humanity of those accused of practising witchcraft,

f. create victim support units to facilitate reintegration and conciliation of those accused,

There can be no human culture without human rights for all !

South Africa faces a growing refugee crisis as victims of witchcraft accusation who either survive assault or are expelled from their communities by community leaders, traditional leaders and traditional healers, after being tried in traditional courts and found guilty through divination, of alleged but still unproven accusations of witchcraft activity.

Under existing traditional customary law, Traditional Courts currently adjudicate on matters relating to accusations of witchcraft. Existing customary laws and beliefs concerning Witchcraft, however, remain prejudicial to citizens who may actually identify as Witches and who practice Witchcraft as a religion.

Traditional Courts within sub-Saharan Africa share a commonly held belief that Witchcraft is not a faith that people openly profess, and do not recognize Witchcraft as a constitutionally protected religion.

Customary beliefs about Witchcraft remain wholly prejudicial to actual Witches, where Witches are viewed as being responsible for misfortune, illness or untimely death. Traditional beliefs do not assume that a Witch may be innocent of such accusation because it is believed that such criminal acts are in keeping with the nature of the practice of Witchcraft.

Citizens accused of Witchcraft and tried within traditional courts are not provided with legal counsel and evidence presented in such courts, including formal consultations with diviners in determining or alleging guilt, does not qualify as proper evidence in any other court of law. Accusations of Witchcraft discriminate against those accused, and marginalize an already existing religious minority that identifies Witchcraft as its religion.
The South African government will not acknowledge the existence of these refugee villages or refugees, and seeks to increase the authority and influence of traditional leaders and traditional courts.

Refugees of witchcraft accusation cannot remain an unspoken secret or unchallenged opportunity. Victims of accusation deserve true restorative justice. They deserve to live with dignity, without shame, guilt or fear.

Do the right thing… Condemn witch-hunts 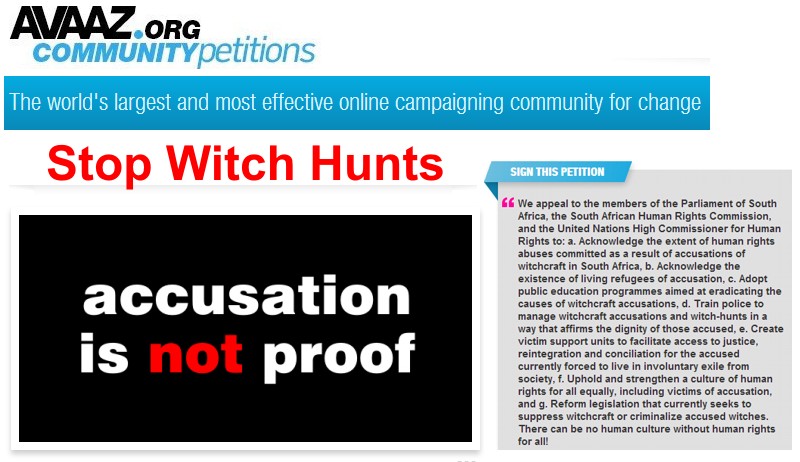